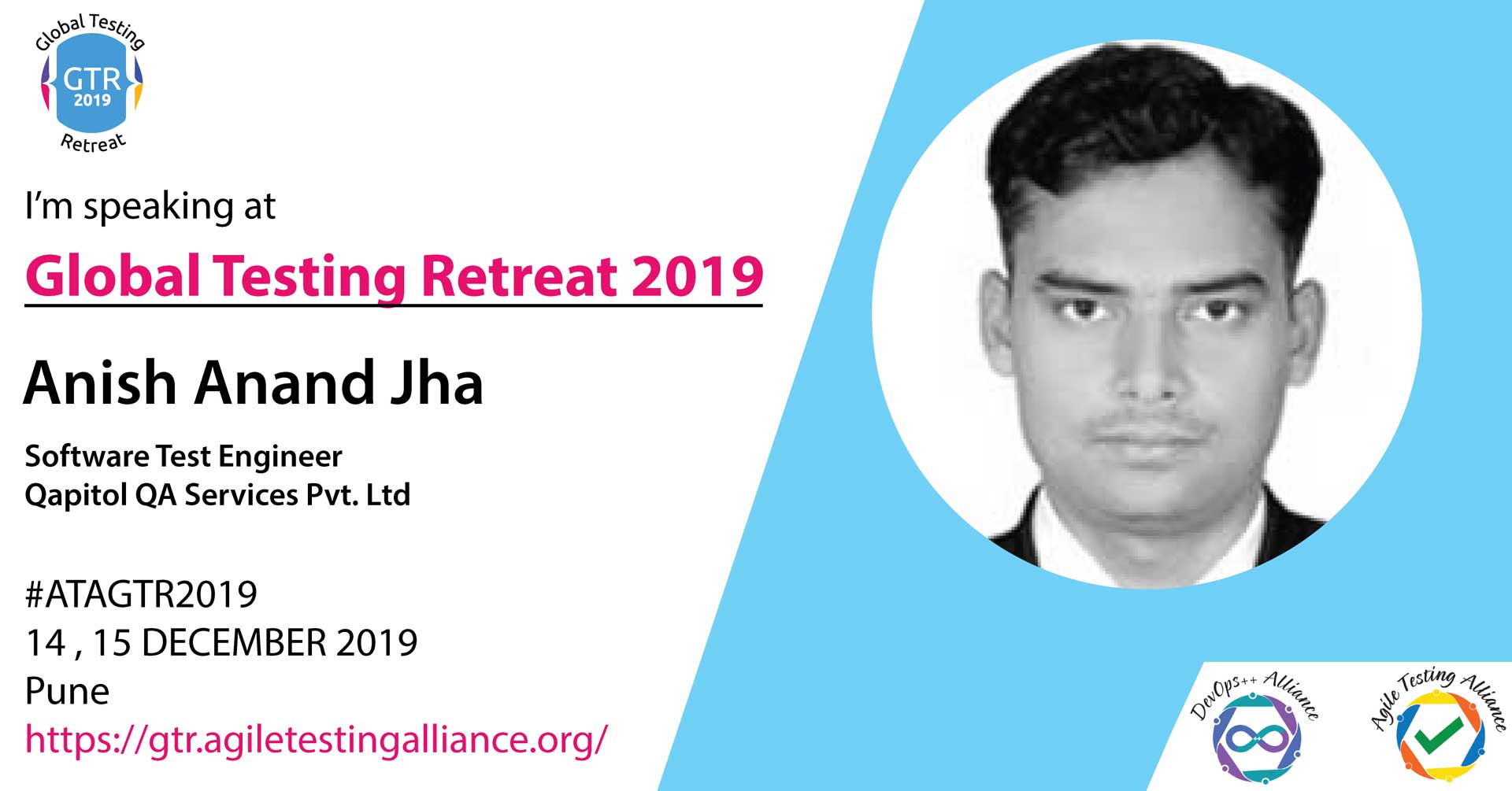 We would like to Welcome Anish Anand Jha as our esteemed speaker for Global Testing Retreat #ATAGTR2019
Anish Anand Jha is a Software Test Engineer at Qapitol QA. He has been in this work for 3 years. He has done Masters in Computer Application from Gujarat Technological University. He started his career as a UAT Tester and then he has involved with many Applications Testing like Android, iOS, IoT applications and Embedded testing as well.
Embedded testing was such as critical and challenging work for Anish. He would like to introduce Dr Vinoth, ex-scientist ISRO, who inspired him to take the opportunity, how to make things easy by modulating complex problems into small pieces by observations.
Currently, he is doing automation on iOS, Android and Web Applications using Appium and Selenium tools and game application automation using image recognition.
Anish is our esteemed speaker for #ATAGTR2019.
Anish will be taking an Interactive Session on “iOS App Automation, GitHub and Jenkins integration” – Track 1 on Day 2

First of all, this abstract is a memorandum of my battles when I tried integrating Jenkins in my iOS projects. The main idea of this is to avoid other developers who start using CI/CD systems spend a lot of time on the investigation for implementing a basic pipeline. I’m sure that it’s possible implementing the system I’m going to explain in multiple ways and I’m open to listen to alternatives or improvements because, as you know, the software is always improvable.

What are you going to learn? What Continuous Integration and Continuous Delivery is. Installing Jenkins on macOS and basic use. What is a webhook? Creating a webhook with GitHub. Using Fastlane on the iOS project. What is ngrok? Opening our local server with ngrok. Creating a basic Jenkins job for doing any action after pushing a commit.

What’s Continuous Integration and Continuous Delivery? Continuous integration (CI) is the process of automating the build and testing of code every time a team member commits changes to version control. CI encourages developers to share their code and unit tests by merging their changes into a shared version control repository after every small task completion. Committing code triggers an automated build system to grab the latest code from the shared repository and to build, test, and validate the full master branch.

Continuous Delivery (CD) is the process to build, test, configure and deploy from a build to a production environment. Multiple testing or staging environments create a Release Pipeline to automate the creation of infrastructure and deployment of a new. Successive environments support progressively longer-running activities of integration, load, and user acceptance testing. Continuous Integration starts the CD process and the pipeline stages each successive environment the next upon successful completion of tests.

We had posted some questions to Anish as a part of his #ATAMyStory
1. Why should someone choose testing as a career ? Or What does testing really mean to you ?
A simple answer is I love to be a Software Tester. So, I chose Software Testing as a career. I would like to mention a few more points on why I love to be a Software tester and chose Software Testing as a career because I love to take challenges, interact with people, be in a team where quality products will be delivered and I like to write code too.
2. While practice makes all of us perfect, share an everyday practice that has made things better for you at work
My way of remained focused was simple but effective. I used to have a skeleton of my day to day work; either in my brain or drawn on paper and kept it in my pocket. As the day progressed, I used to add/subtract/change it and stay as close to the objective for the day.
I was very quick to prioritizing my list viz a viz the time needed and/or at hand. That gave me real help in always having a ‘work horizon’ in front of me and I was never troubled.
3. The most challenging bug or issue that I have found and learnings from it ? Or The most challenging testing task that I have done and how I accomplished the same
The scenario is related to the embedded testing, where I was using ESP8266 microcontroller for smart water filter. I was trying to get the actual flow rate for water but sometimes getting garbage value. We reviewed code with team members and with superiors but there were no faults in the code. I did four hours testing continuously to get the root cause of the problem then finally decided to change the microcontroller and tried again and then this time I succeeded. The microcontroller was behaving faulty.
On that time, I decided to check each and every prospective thing which was related to the project to remove the obstacles.
Currently, I’m using that prospective to improve my analytical skills in testing.
4. Anything else you want to share
Apart from testing, I love to read about new technologies and tools. And also love to attend technical webinars and events.

#ATAGTR2019 is one of the largest, most fun filled and learning filled global testing conference. #ATAGTR2019 is back again in its 4th edition with more fun and more learnings than in the past. The conference is scheduled on 14th and 15th December in Pune.

Day 1 has 5 tracks and Day 2 has 6 tracks.
Focusing on interactive sessions, labs/workshops, skit performances and fun activities and quizzes and much much more.
The conference scale as is evident has increased substantially. We hope that everyone can be part of this most fun filled and one of the largest global testing conference.
To know more about the conference, click here or on the image below