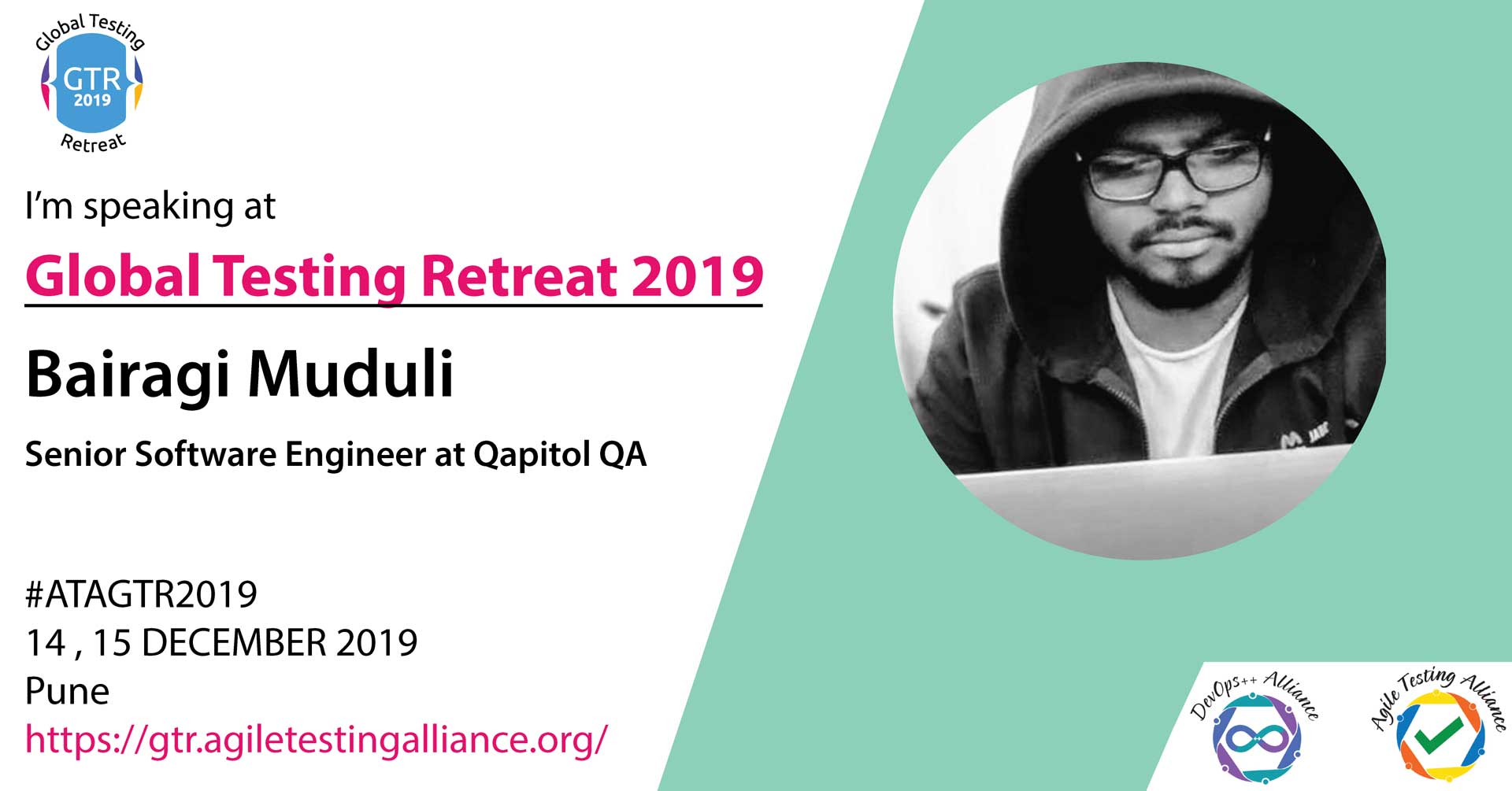 We would like to Welcome Bairagi Muduli as our esteemed speaker for Global Testing Retreat #ATAGTR2019
Bairagi Muduli is an exploratory tester with coding skils in Qapitol QA with an experience of 4 years. He is in love with testing since 2015 and the 1st testing was when he worked on his startup, a failure one.Then he joined Microfocus (formerly Novell) and started from very complex application testing and now automating more complex flows of Myntra. He always has an interest in Hacking, poem, writing and nowadays writing code also.
He has been here for the last 4 years. He doesn’t like to read the documentation so he likes exploratory and random testing, and he is very good at it.
Bairagi Muduli is our esteemed speaker for #ATAGTR2019.
Bairagi will be taking a hands on Lab Session on “API automation using postman” – Track 5 on Day 2
We had posted some questions to Bairagi as a part of his #ATAMyStory
1. Why should someone choose testing as a career? Or What does testing really mean to you ?
If someone is interested in learning new this and has a bug of finding small small issue in everything s/he should go for testing. it’s in you including the mind.
Testing really means to me is “lest’s make the world a better place.”
2. While practice makes all of us perfect, share an everyday practice that has made things better for you at work
Give the brain a pause, go out of it, if you are inside an issue. The problem looks easier from outside.
3. The most challenging bug or issue that I have found and learnings from it? Or The most challenging testing task that I have done and how I accomplished the same
Performing install upgrade of IDM 4.6 (novell) in windows for 5 languages.
There was a bug which was crashing the app (MF iPrint app both ios and android) and quite impossible to reproduce. it took time but lead to a few more crashing bugs caused by both server and app side code issue.

#ATAGTR2019 is one of the largest, most fun filled and learning filled global testing conference. #ATAGTR2019 is back again in its 4th edition with more fun and more learnings than in the past. The conference is scheduled on 14th and 15th December in Pune.

Day 1 has 5 tracks and Day 2 has 6 tracks.
Focusing on interactive sessions, labs/workshops, skit performances and fun activities and quizzes and much much more.
The conference scale as is evident has increased substantially. We hope that everyone can be part of this most fun filled and one of the largest global testing conference.
To know more about the conference, click here or on the image below