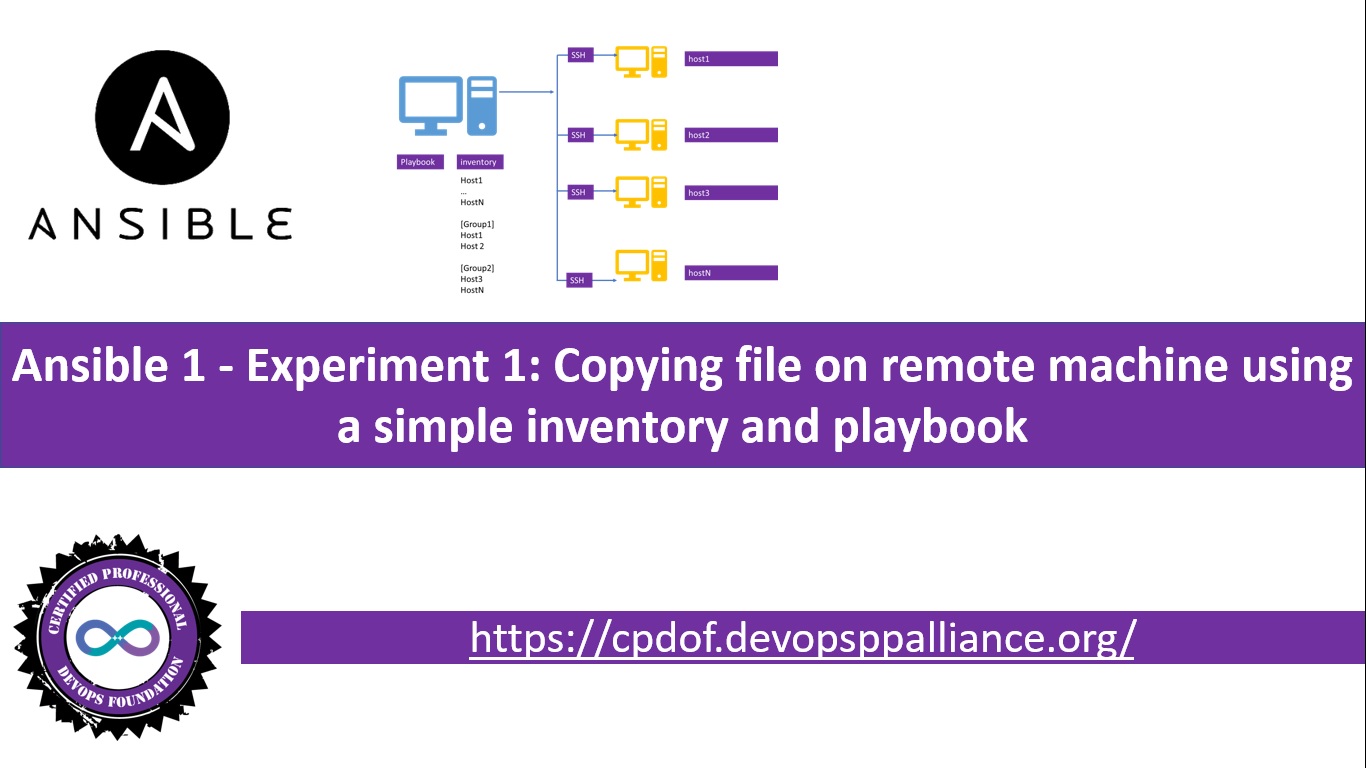 This blog is the first in the series where I am attempting to share my experiments on using Ansible. The first experiment that I took upon is copying files on remote machines using ansible inventory file and playbook files.

What exactly is ansible

Ansible is an IT automation tool. It can configure systems, deploy software, and orchestrate more advanced IT tasks such as continuous deployments or zero downtime rolling updates. It is one of the most important pieces today in the DevOps world, allowing us to treat infrastructure as a code.

You can actually refer to see loads of information and knowledge.

If you do not have a linux machine – > Create an account on GCP/Azure/Amazon and get your first ComputeEngine/Azure virtual machines/AWS EC2 instance. I would recommend GCP or Azure for the simplicity and usability compared to AWS EC2 (again the hard core Amazon fans will beat me on this 🙂

Installation of Ansible is extremely simple, follow these steps

or refer the following page for installation of Ansible

Ansible works in the following way:

Sample inventory file code I am using is a normal text file – code is as below:

Sample playbook file – Playbook1.yaml is below:

STEP 1: Create an inventory file containing a remote host as a part of a group

The sample inventory file shown above contains a variable ‘Host1’, which defines the host IP address, connection type and credentials required to connect to it. More hosts, which are to be remotely managed, can be listed in similar fashion.

Generally the hosts on which ansible would execute the commands, modules and tasks within a playbook to change the configurations or retrieve the health statistics are listed in a file named as inventory.

In the screenshot below, the ansible controller machine shows the testfile.txt that is to be copied on to the remote machine 101.53.137.53.

Before the playbook is executed, the folder contains three files only viz. inventory.txt, playbook1.yaml and testfile.txt.

In the playbook shown above, the copy module takes src (path of file to be copied) and dest (remote absolute path where the file should be copied to) as inputs to perform the file copy operation. Note that indentation is important while defining the tasks within YAML.

After the playbook is been executed, the testfile1.txt is copied to the host machine.

Hope you enjoyed my first attempt at writing a blog. I would like to mention that this blog is supported by Agile Testing Alliance and DevOps++ Alliance community initiative of helping folks like me and many others.

You can reach out to me

and ATA Linked in page